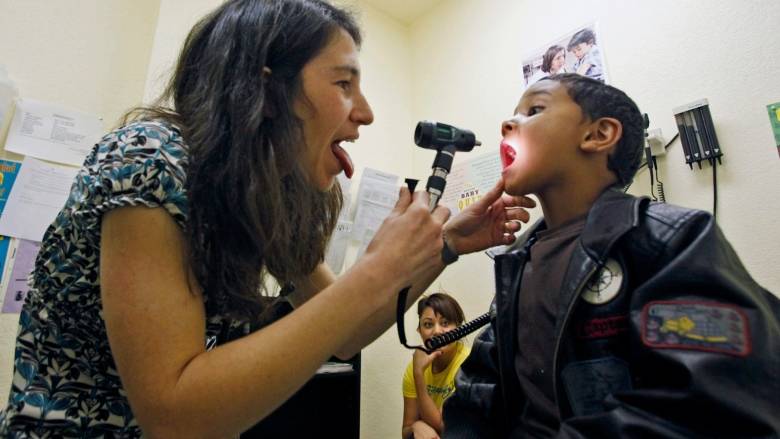 Ian McLean, the president of the Greater Kitchener Waterloo Chamber of Commerce, says doctors that are retiring often will have patient loads of somewhere between 1,800 to 2,000 patients. New doctors coming in will not take on that number of patients. (Damian Dovarganes/Associated Press)

The number of residents in Waterloo region who need a doctor may have dropped in recent years, but it’s the increase in the number of doctors who are retiring that concerns Ian McLean.

He’s president of the Greater Kitchener-Waterloo Chamber of Commerce and he’s hoping the city of Kitchener will share his concerns.

It’s why he’s asking the city to allocate $10,000 in its 2017 budget for the chamber’s doctor recruitment task force.

“For every doctor that retires, they have 2,000 patients. To replace that doctor, we probably need a doctor and a half to a doctor and three quarters, because they take smaller patient loads,” McLean said.

The chamber is hoping a combined contribution from Kitchener, Waterloo and Woolwich township will make up 25 per cent of the $150,000 budget used to woo health care providers and their families to set up practice in the area.

The remaining 75 per cent is funded by the local private sector.

If you need a doctor you may be in luck at the moment. Of the 500 doctors in the area, 167 are accepting patients.

Martina Rosza, the senior director of operations for the Waterloo-Wellington Community Care Access Centre, said they have to consider fit, preference and access.

“You also have issues around patient complexity. So you may have a patient who has a chronic disease where you’ve got a specialist or primary care physician who specializes in the management of that type of chronic disease, but can’t take a patient right now.”

But the number of people who say they need a doctor is around 23,000.

The reasons why they need a doctor may not be as simple as just not having one, she said.

Some of those people may be frustrated with lengthy wait times to get in to see their doctor, so they put themselves on the list to get a different doctor.

“Is it true that you really can’t get in because they don’t have an appointment or is it because they need other types of specialty care that they seek out first from their family physician,” Bitonti-Bengert said.

“And then that primary care provider has problems accessing other parts of the system, for example, mental health or other specialists.”

Donna Gravelle is facing a similar problem as McLean. The physician recruitment coordinator with Cambridge and North Dumfries said they are trying to keep up with matching patients to new doctors as older doctors retire.

“Our main focus [is] to get these practices filled before the physician leaves,” Gravelle said.  “Most of these are and will be solo practitioners retiring with large patients rosters.”

She said there are three main reasons people call her looking for a doctor: they’re new to Cambridge, their doctor has retired or they’re looking to switch to a new doctor.

“There are still patients looking and we are always recruiting due to retirements, moves and clinics expanding,” she said.

Here’s how to get a health care provider in the region.

This article was written by Joe Pavia for CBC News. Read the original article here.