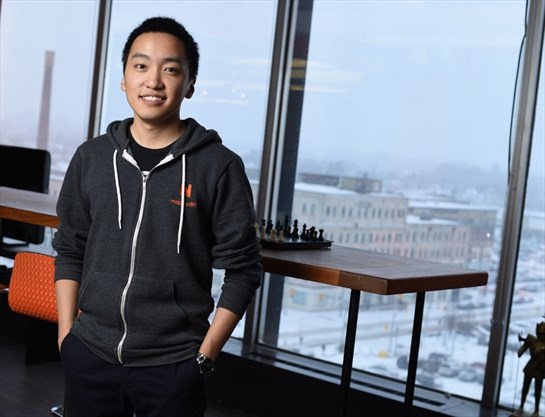 KITCHENER — A pork processor, marketing agency and divorce mediation firm have been named businesses of the year by the Greater Kitchener Waterloo Chamber of Commerce.

Conestoga Meat Packers was named Business of the Year for companies with more than 50 employees. Founded in 1982, the Breslau-based business employs more than 900 people and processes more than 28,000 hogs a week. The chamber noted that the company takes an innovative approach toward its long-term growth strategy; for example, it created a customized online “Producer Portal” providing 170 local farmers access to industry news and events and allowing them to review performance and productivity.

Intrigue Media Solutions received the Business of the Year award for firms with 11 to 50 employees. The full-service marketing agency serves more than 150 clients across southern Ontario and Quebec, Alberta and British Columbia, and owns and manages more than 175 video advertising displays. The company hit $2 million in revenue last year, with a goal of $3 million this year. Headquartered in Guelph, the business has two offices in Waterloo Region.

Fairway Divorce Solutions was named Business of the Year for companies with 10 or fewer employees. The business specializes in finding amicable and fair outcomes for divorcing couples. Ninety-five per cent of its clients have used its mediation services to avoid going to court, and the Waterloo office has tripled its annual caseload to 38 couples.

Nine other awards were also presented.

Hongwei Liu of MappedIn was named Young Entrepreneur of the Year. The former University of Waterloo student and his team created interactive software that maps large indoor spaces like shopping malls. Nine of the 10 largest shopping centres in Canada use MappedIn.

Murray Gamble of Breslau-based engineering and contracting firm C3 Group was honoured with the Michael R. Follett Community Leader Award. Gamble is an angel investor and mentor to several technology startups, and is an active volunteer in the local arts community, serving on the boards of organizations such as Themuseum and the Kitchener-Waterloo Art Gallery.

Karen Temple of BDO Canada LLP was named Volunteer of the Year. Gamble has volunteered for several years with the Chamber of Commerce, and is the past chair of the Women’s Leadership Committee. She also helps to plan the annual Inspiring Women event, and served on the Business Excellence Awards nominations committee from 2011 to 2014.

The Employee Engagement Award went to Waterloo general contractor and construction management firm S.G. Cunningham Limited. The chamber noted the business’ commitment to training through innovative programs such as quarterly safety barbecues. Employee health is also paramount, with access to a personal trainer and healthy, company-provided lunches on Fridays.

The Non-Profit/Charitable Award went to the Strong Start Charitable Organization, which focuses on early literacy through partnerships with schools, community centres, volunteers and donors. Since 2001, its “Our Letters, Sounds and Words” program has grown to serve more than 245 schools in Waterloo Region and Wellington, Brant, Haldimand, and Norfolk counties.

Borealis Grille & Bar received the Environment and Sustainability Award. The Kitchener restaurant has a focus on environmental sustainability and wellness, sourcing 80 per cent of its food and drinks in Ontario and serving only Ocean Wise-approved seafood. Some of its initiatives include using solar power and working with the universities of Waterloo and Guelph to reduce wasted food.

The Health and Wellness in the Workplace Award went to Dillon Consulting Limited, an employee-owned firm with offices across Canada, including in Kitchener. The company makes wellness a priority through such programs as Thrive, which includes fitness challenges, movement breaks and healthy lunch groups. It also offers employee assistance programs, reduced gym memberships and flexible working hours.

The Hospitality/Tourism Award went to Centre in the Square, which was recognized for its attention to both out-of-town visitors and the local community. The chamber noted that more than 190,000 people attended more than 180 events held at the Kitchener arts venue last year.

The Innovation Award went to Driverseat Kitchener, which provides drivers who drive the customer’s own vehicle for them. The company has developed a mobile app to support the business, connecting clients with drivers and auto-billing for the service. The Kitchener-based firm now has 25 franchise sites.

This article was written by Record Staff for the Waterloo Region Record. Read the original article here.