Committee hears from all sides in labour debate 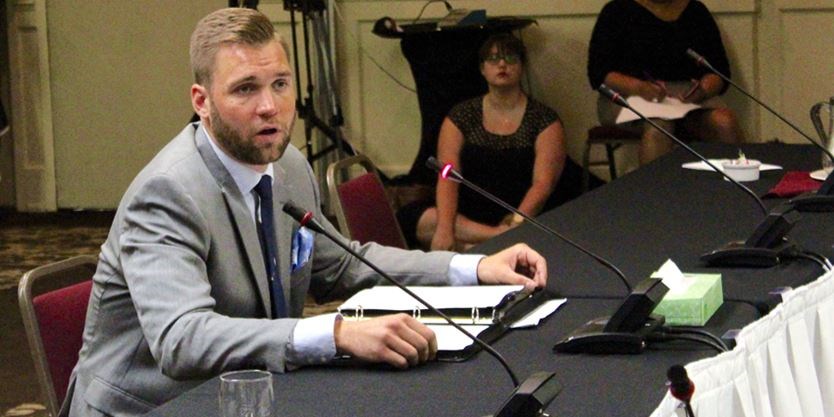 There was no lack of opinions shared with Ontario’s standing committee on finance and economic affairs as delegates lined up to have their say concerning Bill 148’s amendments to the employment standards and labour relation acts Tuesday, July 18, in Kitchener.

The committee heard from about 20 organizations and individuals during the course of the day, sharing their praise or concerns about the bill, which would radically change workplaces throughout Ontario.

Cambridge’s Helmi Ansari, owner of Grosche International, was among the first to speak. He has already increased the minimum wage for his 10 employees to $15 an hour, calling it, “just the right thing to do.”

“It just makes sense,” said Ansari, one of the 40 employers who have joined Living Wage Waterloo Region. “It lifts people out of poverty, so they don’t have to worry about food, shelter or child care, so they can concentrate on work.”

Ansari told the committee that paying a living wage has benefited his company, making it successful, reducing staff turnover rates and the need to train replacement workers. Providing workers with a living wage means they have money to buy products, he noted.

“The transition will be a challenge, but the rewards will be tremendous,” Ansari said.

“Our chamber has some serious concerns,” Sinclair said, noting uncertainty regarding the planned Jan. 1, 2019 implementation of the $15 per hour minimum wage. “We’re not sure businesses can absorb this increase, when revenues have not increased at a similar level.”

He went on to note more emphasis needs to put on training to help fill the more than 2,500 job openings currently available in Waterloo Region’s tech sector.

Referring to the proposed $15 an hour minimum wage, Drouillard called it, “the tip of the iceberg in causing damage to Ontario’s economy, along with the 173 other changes.”

He noted small businesses can ill afford to give employees 10 days off in sick leave or pay employees for cancelled shifts. He noted businesses like landscapers and construction companies are affected by weather, which needs to be considered in the proposed legislation.

“Nothing in this bill speaks to fairness for employers,” he said.

During the followup questions to his presentation, Drouillard called for a full economic review of the proposed changes, looking at the short and long-term benefits of the bill.

Liberal committee member Mike Colle said the government usually does not go out to the public for consultations on a bill until it has passed second reading in the legislature, but in this case the consultations are taking place after first reading to hear people’s concerns and make changes.

“I see the value of fair wages … but this is too fast, too soon. It’s too steep an increase,” he said of the proposed minimum wage hike.

Like Drouillard, Oliver urged the committee to have an economic analysis done before moving forward.

“There are a lot of things at play here. I need the data to make a decision. If it makes sense than let’s do it,” he said.

During Tuesday morning’s session, the committee also heard from representatives of CUPE Ontario, the Worker’s Action Centre and Parkdale Community Legal Services, which all had glowing remarks for the amendments.

CUPE president Fred Hahn praised the bill for increasing protections for unions, as well as providing paid sick days and leave for all workers.

Worker’s Action Centre co-ordinator Deena Ladd focused much of her presentation on the need for workplace reform and the need to protect temporary and migrant workers.

She noted many employers do their hiring through temporary agencies. In some cases workers aren’t aware they are working for a temp agency and not the company where they work. Ladd noted workers taking home $12 an hour might get $15 an hour if the temp agencies weren’t taking $3 an hour off their pay cheques.

Mary Gellantly, community legal worker with Parkdale Community Legal Services, focused her presentation on women in the workplace and the shifts taking place in worker classifications, where full time employees are being reclassified as part-time or contractor workers who are without benefits and paid by the job and not an hourly rate.

She applauded the call for equal pay for equal work, but suggested the province should also better enforce the laws it already has on the books.

This article was written by Ray Martin for the Cambridge Times. Read the original article here.