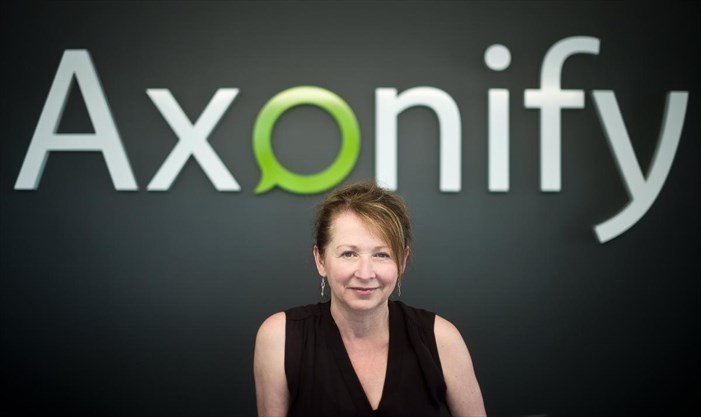 Carol Leaman is the CEO of Axonify. The Waterloo tech firm won the Business of the Year award for companies with more than 50 employees at the Greater Kitchener Waterloo Chamber of Commerce awards dinner Thursday night. – Mathew McCarthy , Record staff file photo

WATERLOO REGION — A leading technology firm, a commercial real estate business and a roofing company are among the businesses being honoured this year by the Greater Kitchener Waterloo Chamber of Commerce.

Axonify, Cushman & Wakefield Waterloo Region Ltd. and Mike the Roofer Inc. were all named businesses of the year at the annual Business Excellence Awards gala Thursday night in Kitchener.

Axonify was named Business of the Year for companies with more than 50 employees. The Waterloo-based firm, founded in 2011, specializes in business software that trains employees and builds their knowledge. The growing company moved into a larger building last year and now has more than 140 employees.

Cushman & Wakefield Waterloo Region received the Business of the Year award for companies with 11 to 50 employees. Located in Kitchener, the commercial real estate brokerage prides itself on corporate social responsibility and an inclusive workplace culture, the chamber noted. The local office employs 33 people and saw revenues increase last year by 105 per cent.

Mike the Roofer won the Business of the Year award for companies with 10 or fewer employees. The Breslau-based company was praised for its innovative spirit and willingness to support other local businesses, by recommending other contractors. The chamber also noted the company’s desire to give back, citing instances where the firm has given away roof work for free or at cost.

A number of other businesses and individuals were honoured at the event.

•Waterloo’s Monarch Collection Inc. received the New Business of the Year Award. The company designs clothing for individuals who require assistance dressing, such as people with disabilities or dementia. Monarch produces its products in Canada using environmentally-friendly materials including modal, a fibre derived from beech trees.

•Dundee Recycling Ltd. was given the Environment & Sustainability Award. The New Dundee-based scrap metal recycling facility strives to mitigate environmental risk through measures such as state-of-the-art storm water interceptors and a fully-cemented yard that protects the soil.

•Waterloo North Hydro Inc. won the Health & Wellness in the Workplace Award. Employees are offered everything from fitness and healthy cooking classes and wellness consultations to fitness bursaries offered to employees and their children. The utility has also offered mental health programs since 2012.

•Waterloo’s Oculys Health Informatics Inc. received the Innovation Award. The business specializes in software aimed at reducing hospital bottlenecks and wait times; it was recently selected to participate in the Lazaridis Scale-Up Program.

•Business & Education Partnership of Waterloo Region was given the Non-Profit/Charitable Award for its work connecting youth with employers, educators and community partners. The organization offers a host of programs and events that reached nearly 10,000 young people last year.

•Carrie Mulrooney of Mulrooney & Associates received the Volunteer of the Year Award for her work with the chamber. The small business owner participates in the Business After 5 committee, chairs an event committee, and often donates her time in speaking with prospective members.

•Chloe Hamilton of Warm Embrace Elder Care was named Young Professional of the Year. Hamilton established the business with her mother and sister about a decade ago, and has seen the company post average annual revenue growth of 50 per cent. Hamilton is also an active community volunteer.

This article was written by the Waterloo Region Record. Read the original article here.